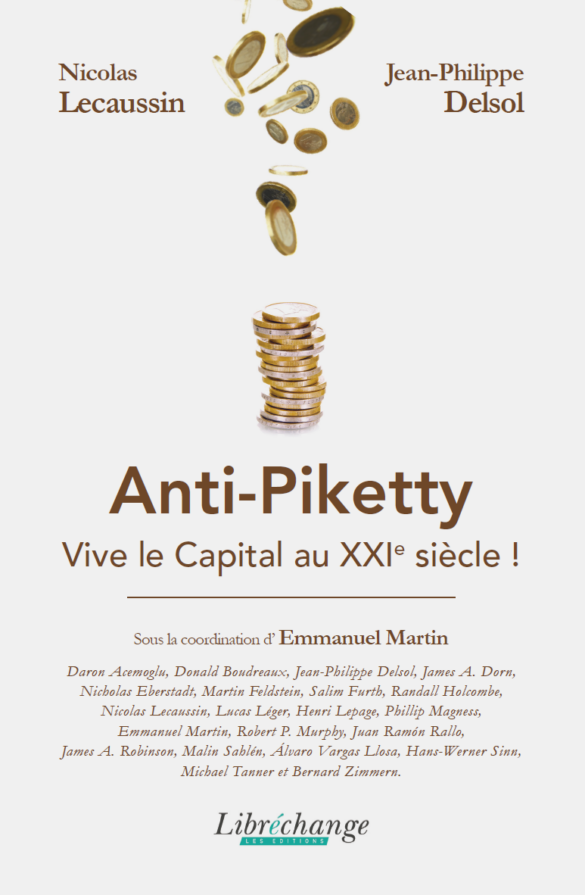 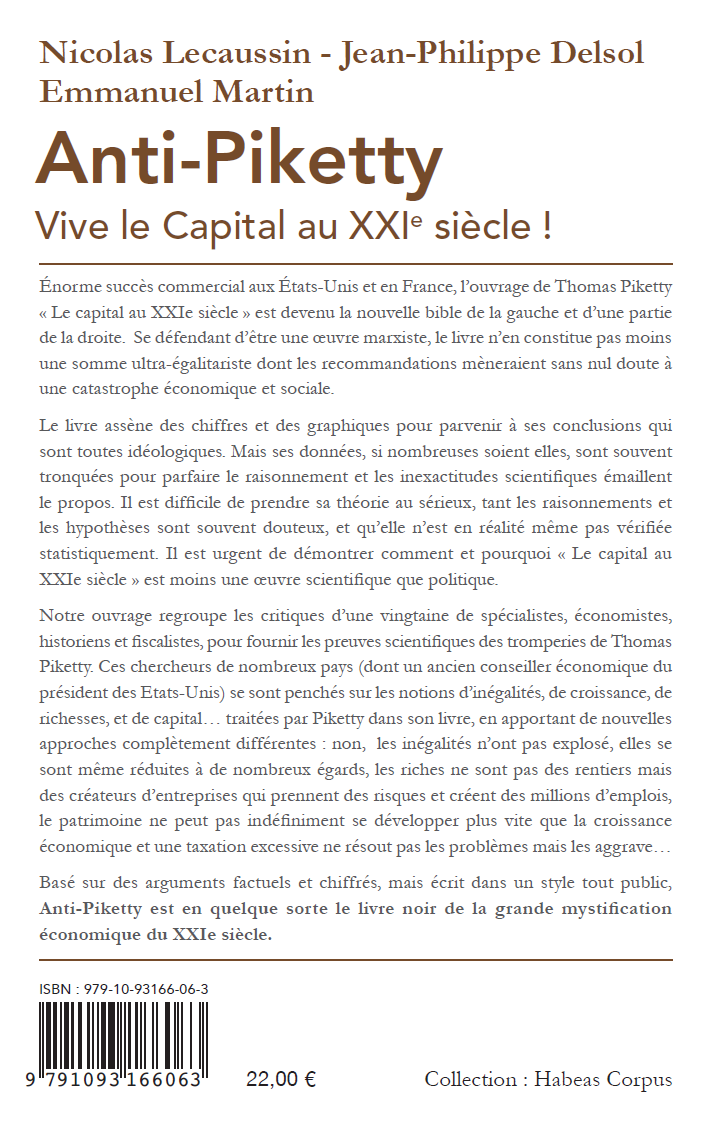 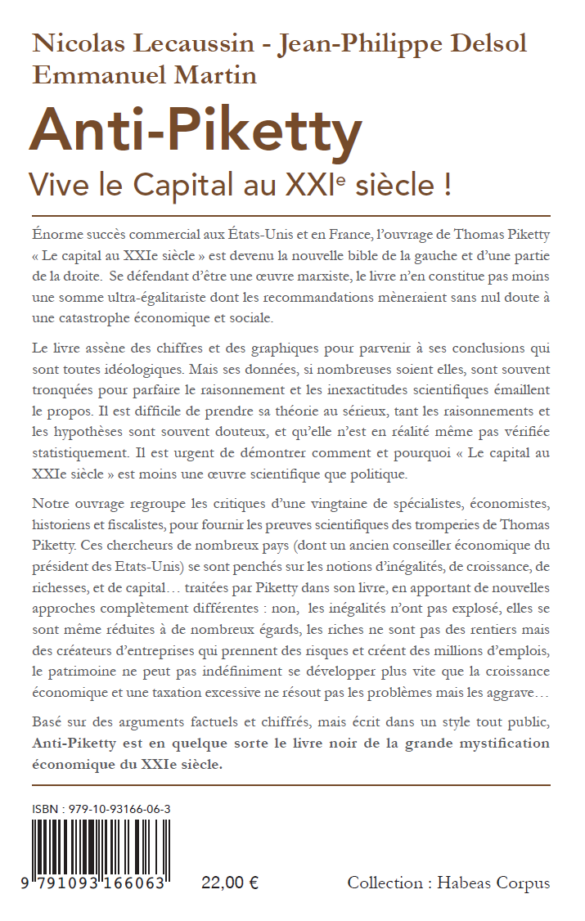 From: Thomas Piketty <thomas.piketty@psemail.eu>
Date: 2014-06-13 3:37 GMT-03:00
Subject: RE : Piketty’s Capital – The Answer of a convinced
Liberal
To: Ronaldo campos carneiro <rcarneiro4@gmail.com>
Thanks Ronaldo, I appreciate it. Best, Thomas

From: Pedro Schwartz <pedro@pedroschwartz.com>
june,13,2014
Dear Mr. Carneiro:
I find what you say complicated and will think on it.
However, I think Piketty is wrong in his forecast of the
future of capitalism.
Sincerely

Dhian Chand <mdhianchand@hotmail.com> june.14,2014
2006-7 DG – 3080 District
Shimla Him. Pr. India
Dear PDG Ronaldo Carneiro,
Thank you for sending me your evaluation of Piketty's
Capital – the answer of a convinced liberal. You have
motivate me to buy and read his book "Capital in the 21st
Century". You have rightly concluded in the last four points,
the people responsible to create balance in the social
economic status in the society. However, the question
remained unanswered that politicians and bureaucrats have
no limit for their greed for money and power which
ultimately encourage corruption in the country and war
between neighbouring countries. If we are able to influence
these two category of our society the balance in distribution
of economic growth will be maintained and there will be no
poor in the modern world which due to technology
evolution has become one a global village.
Regards
Dhian Chand

From: Anthony de Jasay <jasay@wanadoo.fr>
14/6/14
Dear Mr. Carneiro,
I have had your letter of 13 June read to me (as you may
know I have lost my eyesight long ago). I agree with most
of it , but as you must know very well it is not by
condemning politics and politicians for being toxic and
nasty that thay will become any less harmful. They are a
probably inevitable product of one man, one vote.
Yous sincerely,
Anthony de Jasay

From: Stephen Raudenbush – 13/6/14
sraudenb@uchicago.edu
Dear Ronald
Thanks for sending this. I have admired your work and
made very good use of your book with James Heckman on
inequality.
I do have a few questions
* Why are key elements of Sen's "human development
index" so much better in the European social democracies
than in the US?
* Why have the countries that employed a Keynesian
stimulus done so much better during the recession than
countries that used the recession to reduce government
spending?
I believe you have offered a false choice between heavy
government involvement and light government
involvement. All sides are competing to use the
government to support their own special interest. If the
government does not intervene to insure child care,
education, health, housing, minimum wage, unemployment
insurance, and social security for the elderly, and protect
the environment, the result will not be a utopian laissez
faire society. Instead, government resources will be
directed entirely to prop up agri-business, build roads to
support real estate developers, save failing banks, generate
unneeded contracts for lobbyists, etc. In sum, we will have
neither social democracy nor laissez faire but rather
socialism for the rich, which is pretty much what the US has
now.
Why did you not comment on our extraordinarily corrupt
political system in which running for low level offices now
requires millions of dollars? Where huge firms literally
dictate legislation to the office holders they have
bankrolled?
I would propose a government role that does the good
things I mentioned above while aggressively intervening
against oligopoly and favoritism to insure competition in the
market place. The government can be a friend of the free
market and a friend of meritocracy while insuring basic
necessities, particularly for the children and the elderly, and
supporting human capital development.
Sincerely
Steve Raudenbush

From: William Anderson – 13/6/14
banderson@frostburg.edu
If these points are true, then are you saying that the vast
amount of people are materially poorer than they were,
say, in 1980? That they have fewer goods and services
available to them now than they had then?
It seems to me that the theories depend upon (1)
homogeneous capital (capital as a lump of stuff that is
useful primarily for how much is spent in creating and
accumulating it), and (2) underconsumption. We have been
getting underconsumption theories at least since “Fable of
the Bees.”
Now, we do have a lot of what is called crony capitalism
today, in which owners of capital, through political
alliances, are able to force resources into a direction that
would not be profitable (or would be less profitable) without
the government intervention. However, from what I can
tell, Piketty is not so worried about this development.
Piketty would prefer lots of people to be poor to make Bill
Gates and a few other people pay more taxes.
If Piketty’s thesis is true, then the vast majority of people
today are poorer than were the people of the early 1800s,
when the development of large-scale capital really took off
in Great Britain and in Europe. Are you prepared to say
that? Think of the logic of his thesis; are you prepared to
claim that a larger percentage of people are poor today
(and living in worse conditions) than were people of the
early 1800s?
Then, to follow Piketty’s logic, the bifurcated returns to
capital (versus ordinary income growth) would have to be
consistent from the very start. Thus, you are having to
claim that the poor today are poorer than the vast majority
of people in the early 19th Century. Can you empirically
justify that statement?

From: g.reisman@capitalism.net – 13/6/14
Dear Mr. Carneiro:
Thank you for your review of Piketty.
Attached, please find a copy of my review of him, which
I’ve just posted to my blog.
Sincerely,
George Reisman

From: studiosarpietro@gmail.com
june, 16, 2014
Dear fellow Rotarian Ronaldo Carneiro,
thank you very much. your thoughts on the book of Piketty
are very interesting, especially in this period we are going
through.
I will continue to reflect on this, and I will send it to my
daughter who is studying Economics.
Many greetings.
Salvatore Sarpietro
2007-08 DG – 2110 District

Benegas-Lynch, Jr., Alberto
National Academy of Sciences, Argentina
abenegaslynch@yahoo.com – june,20,2014
Dear Ronaldo Carneiro, thak you for sending your
papers that I will read with great interest. In the
meanwhile, I copy one of my weakly columns on the
subject. Cordially, Alberto Benegas Lynch, Jr

From: Floy Lilley <floylilley@mises.com>
Date: 2014-06-20 17:29 GMT-03:00
Subject: Re: About Piketty’ s Book on Capital – The answer
of a convinced liberal
To: Ronaldo Carneiro <rcarneiro@salutecafe.com.br>
Hello Mr. Carneiro,
Your enthusiasm for this project is palpable. That's a fine
way to feel about whatever you do.
You embrace Piketty's work in ways that I do not. I do not
find that he proves his thesis.
Thank you for having thought of me.
Best,
Floy Lilley

From: Rev. Robert A. Sirico <rsirico@acton.org>
Date: 2014-06-21 13:30 GMT-03:00
Subject: RE: About Piketty’s Book on Capital – The Answer
of a convinced Liberal
To: Ronaldo campos carneiro <rcarneiro4@gmail.com>
Dear Ronaldo:
Your email arrive just as I had begun reading Pikettey’s
book Capital, so I shall now do so with your critique in
mind.
Many thanks,
Fr. Robert A. Sirico,
President
The Acton Institute

From: Gary North <gnorth@poetworld.net>
Date: 2014-06-23 9:02 GMT-03:00
Subject: RE: About Piketty’s Book on Capital – The Answer
of a convinced Liberal
To: Ronaldo campos carneiro <rcarneiro4@gmail.com>
Don't start with Pikkety. Start woth Pareto: 1897
From: Jaana Woiceshyn <jwoiceshyn@gmail.com>
Date: 2014-07-11 1:29 GMT-03:00
Subject: RE: Why competition is good and regulation bad
To: Ronaldo campos carneiro <rcarneiro4@gmail.com>
Thank you, Ronaldo.—My silence does not imply anything
but me being swamped and not being able to find the time
to correspond—sorry. I hope my life will get less busy soon.
But in general, I disagree with Piketty’s thesis. Inequality is
a non-issue! Regards, Jaana
From: Noam Chomsky <chomsky@mit.edu>
Date: 2014-07-11 1:56 GMT-03:00
Subject: Piketty’s "Capital" – The answer of a convinced
liberal
To: Ronaldo Carneiro <rcarneiro@salutecafe.com.br>
Thanks for sending. Hope to get to it soon.
From: Info <info@profilebooks.co.uk>
Date: 2014-07-18 5:41 GMT-03:00
Subject: RE: Inequalities
To: Ronaldo campos carneiro <rcarneiro4@gmail.com>
Hello,
Thank you so much for your email below.
Unfortunately, Profile books do not accept unsolicited
material. However, we do recommend the following
websites as industry standard for gaining a reputable agent
as well as other tips for publishing. Please do not pay an
agent either – this is usually not a good sign.
· Writers and Artists yearbook
· Preditors and editors
· Absolute write
We most certainly wish you the best with getting published.
Kind regards,
Olu
*****************************************
Olu Ubadike
Office Manager
Profile Books
3A Exmouth House
Pine Street
Exmouth Market
London
From: Ieva NAVICKAIT? <Ieva@llri.lt>
Date: 2014-08-01 4:07 GMT-03:00
Subject: RE: Inequalities
To: Ronaldo campos carneiro <rcarneiro4@gmail.com>
Thank you for sharing, Ronaldo. It will be very interesing to
read your remarks on Piketty‘s book. Let‘s keep in touch.
Best wishes. Ieva
Christopher Spackman comentou
sua publicação.
Christopher escreveu: "Thanx for the article.
Thoughts. 1. Agree that capitalism is well on the way
to eating itself 2. Agree that war is a major problem.
Nation states have abrogated the right to billions of
unprofitable dollars. 3. Agree that answer is probably
not a 'ceiling' but a 'floor' – in other words, the tax
system. If the 'haves' agree to pay generously, then
the problems you point out with health, education,
etc. will disappear. The problem occurs when the
'haves' think they own their money and try to hold it
all. Conclusion: a neat summary of the problem 😉
Christopher"